Every council needs some certain individuals to lead, and this council has three. These members of the council review those matters that are the most important and they sometimes seem to act like an entirely separate council. These High Council members are Naumarienne, Fuemar and Gaelerion.

Naumarienne is the High Tidecaster of Lothain, she is referred to as the Overseer of the currents. She is the eldest and most experienced tidecaster of the Lothlathain too. She teaches those who have been chosen to the Lore of the Deeps.

Fuemar is an odd one, originally trained to become as an Akhelian Prince he turned to priesthood: the way of the Soulscryer. Years after training and learning he ended up as High Soulscryer of Lothlathain. Whenever their King Dorthindrius is away, and the city is in need of defends and in need military leadership, Fuemar will act as a general of the Lothlathain. He will go into battle looking like and acting like an Akhelian King but with the title of Prince.

Gaelerion is Lothain’s Grand Architect. He knows everything about the city as he was its planner. He designed everything, from the city’s defences to its palaces and temples. But there is another reason they liked him to be in the council for he defeated a giant Merwyrm by binding it to the city and making it part of its defence mechanism

The Temple of Currents was Gaelerion’s first grand construction, a true and marvelous piece. Designed to be a place of worship, rest and peace. But it’s also a place where the memory of Mathlann is being kept alive. In the Centrall Hall stands a huge statue, depicting the dead god in his current forms, the Aspects of the Storm and Sea.

But something dark has been hidden in the lower parts of the temple, something that was found a long time ago. It is dangerous to keep yet important to guard. Some priests identified is as a relic from the World that Was.

The temple is a maze too. For a whirlway lies deep within, it has been designed as a trap for invading forces foolish enough to enter through there, leading them straight to there doom. For the maze has been sealed of from the upper levels of the Temple. Some enemy forces are said to still wander there, never finding exit nor the entrance but always nearing there doom.

And the Temple has many more secrets that will be discovered in later posts.

Other things this week: I’ve started giving my Namarti Thralls some colour, this will be the main scheme for my Idoneth Deepkin army. As you can see below I chose a very dark and murky green as the main tone (with eventually hints of blue in the shaded areas), with blue and purple being the spot colours. I already love the contrast it creates and the way it fits the miniatures. The skin is pale with (in the end) green and light yellow shades and dark blue spots. I really want this army to feel like they have adapted to their surroundings, in this case the Realm of Life: Ghyran.

But at this moment it’s all basecoats and shades, lots of tidying up has to happen and lots of layering too. But I still feel that this gives a clear image of what the Thralls will look like when the ten (and when the numbers grow 20 or 30 of them) are finished. And I’ve done the bases in advance too, just so I would not mess up the painting I will do on the robes in later stages (although the Icon Bearer has been the victim of this).

The pictures are not the best either but it will do for now. 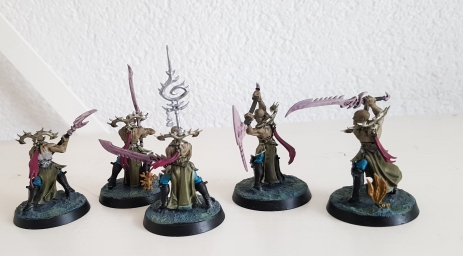 Next week I hope to start work on Dorhtindrius, the Akhelian King and/or a Naumarienne the Tidecaster/Fuemar the Soulscryer. As I am really enthusiastic about using these chosen colours in different ways on, and this is something that is true for the Idoneth Deepkin, the more important figures in the Lothlathain Society.

Tales of A Lone Warlord Tale 3:

Tale three will be all about sea creatures and forest spirits

Tale 3 will be the post where I’ll talk about the relationship between my Idoneth Deepkin and my Sylvaneth. Why they work together most of the times and what the last great battle was where these forces met.

I will also note down some more details about the Temple of Currents, about what chambers have constructed there and what purpose they serve. For this temple is a miraculous drowned in many secrets.

I will also show of the finished Namarti Thralls and a work in Progress on one of the Lothlathain heroes.

Any questions or cool ideas for this projects, or cool names different places in the city of Lothain? Let me know in the comments!